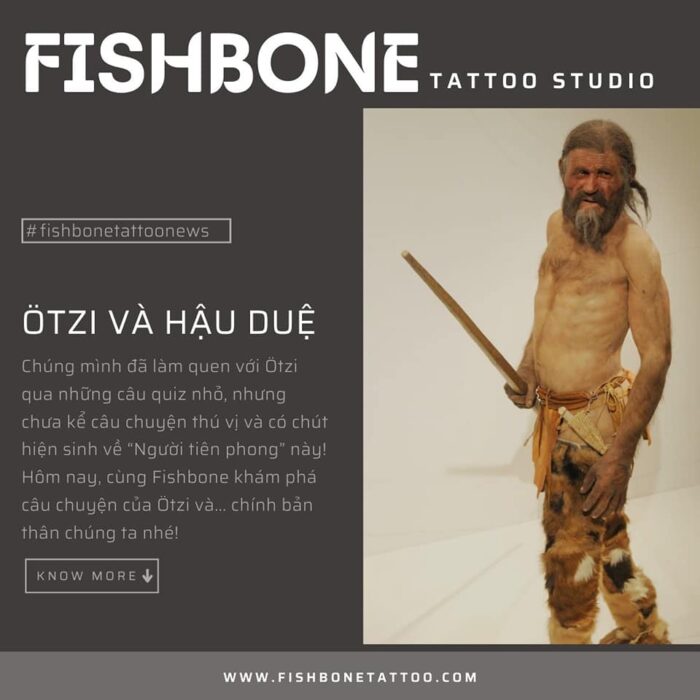 ___________________________
If you have heard of Brad Pitt’s iceman tattoo, you must have known who Otzi was, or if you just simply love tattoos and the internet simultaneously.
Today we’ll deep dive in his existential story to discover the oldest human ever record to have tattoos!
On September 19, 1991, a pair of hikers Helmut and Erika Simon happened to discover Ötzi in the Ötztal Alps (hence his name). At the time, they just thought it was an unfortunate tourist who had an accident and reported it to the regional authorities, not knowing they had just discovered a great event. It was only when an archaeological team came and analyzed, they discovered that the world had met a 5,200 year-old man – the oldest body in the world.
Along with the body parts, Ötzi’s 61 tattoos are also preserved intact. And this is what interests the world most, perhaps more than the discovery itself!
Unlike Egyptian or South American mummies, Ötzi is a “wet” mummy, with all organs and body tissues intact, allowing scientists to study and analyze by autopsy method – providing accurate and fast information – that’s equivalent to having us time travel back 5200 years in time.
The results of the autopsy tell us what Ötzi ate, how long he walked, how his cells behaved, and how he suffered chronic diseases, including osteoarthritis. Tattoos were made by Ötzi incising the skin in parts of the joint and rubbing soot on the wound, a method believed to relieve pain and practiced until much later. “Reuniting” with a lonely man in the middle of endless ice and snow, bearing the traces of endless pain left many of us feel something…
He was a hallmark in archeology and history and a historical witness of tattooing. The discovery of Ötzi has inspired many to get the same tattoos as him. Some millenniums later, we yearn for connecting with a man of our kind.